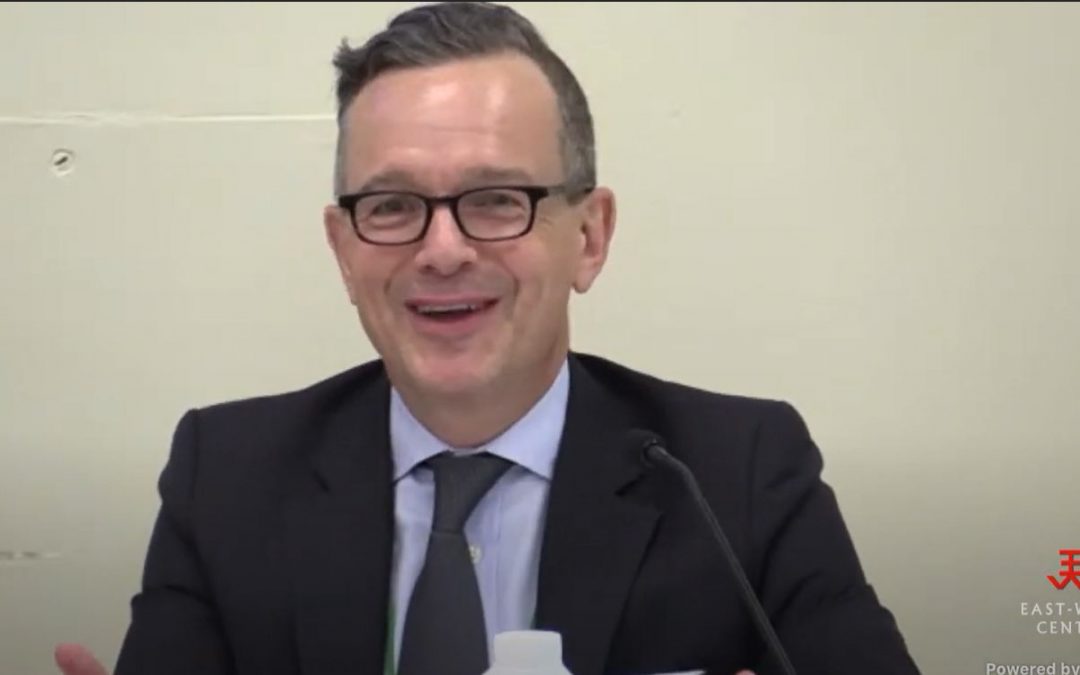 On September 20, 2022, Council President Rupert Hammond-Chambers spoke at the launch of the inaugural edition of Taiwan Matters for America / America Matters for Taiwan, a initiative hosted by the East-West Center and AmCham Taiwan. The event was held at the Rayburn House Office Building in Washington, D.C.

In announcing the event, the East-West Center said:

The East-West Center, with the support of the American Chamber of Commerce in Taiwan (AmCham Taiwan) and the cooperation of the Taiwan Caucus, held the launch of the inaugural edition of Taiwan Matters for America / America Matters for Taiwan, the premier resource for data and analysis on the relationship between the United States and Taiwan relating to diplomacy, defense and security, trade and investment, education and cultural exchange, and more. The Taiwan Matters for America / America Matters for Taiwan publication and website maps the trade, investment, employment, business, diplomacy, security, education, tourism, and people-to-people connections between the United States and Taiwan at the national, state, and local levels. The Asia Matters for America initiative is a collaborative partnership with US and Indo-Pacific government, private sector, and civil society stakeholders to recognize and advance the robust and dynamic US-Indo-Pacific relationship. Funding for this project was provided by AmCham Taiwan.

There is much we could tackle on the economic relationship, many different angles we could go. If you think back to 2016, there was one trade platform where we engaged with Taiwan, the Trade and Investment Framework agreement (TIFA), which was about to go into dormancy for an extended period during the Trump Administration. We now have four! And all of them are active at some level, even though the U.S.-Taiwan Initiative on 21st Century Trade is just formulating and finding its sea legs. Hopefully, we’ll see some important announcements around that prior to the end of the year, and perhaps also some updated information on when we might expect the next TIFA meeting to take place. USTR is active, it is engaged, and critically after several decades [of not doing so] – regardless of whether we had a Republican or Democratic Administration in play –USTR is leaning into the U.S.-Taiwan trade relationship. That is very important. We also, thanks to the Trump Administration, have the State Department and the Commerce Department with their own platforms – and those two are up and running, the EPPD and the TTIC.

I came into this hoping to take an opportunity actually to tie together what the Chinese are up to right now, and the importance of Taiwan’s economy. I would argue to all of you that although it would be cavalier to disregard the intensity and seriousness of the Chinese threat, I don’t see it in quite such binary terms as between peace and war. I actually think the Chinese are trying to encourage us to have that debate here – as opposed to a recognition that the approach the Chinese are taking is much more of an all-phases approach, where coercion is focused on the island of Taiwan and its people to force them into an arrangement on China’s terms, without firing shots at all.

And at the core of that is economic coercion. To create the impression that Taiwan is now a dangerous place to do business. I want to assure you all; nothing could be further from the truth. Taiwan remains – and will remain – a critical player and partner in the global economy. The data out there is wholly significant. Just in the last two days we have seen inbound investments in Taiwan up 25% year on year, even through this supposed period of heightened tensions. The intention of the PRC, through this, is to create the impression that Taiwan is a dangerous place to do business, and place downward pressure on Taiwan’s economic health and well-being. The economic health and well-being of its macro-economy, and that’s of its companies and its citizens. The weaker Taiwan is economically, the more vulnerable Taiwan is economically. The more vulnerable it is, the more able China is to pressure Taiwan into accepting terms and conditions that no people in their right mind would accept.

So I think I would very much like to put what has transpired of late into those terms, and [examine] what we should do about it. What should the West do about it? What should the United States do about it? The Europeans? Large trading powers like the Japanese? We should be leaning into our economic relationship with Taiwan to counter the coercion that the Chinese are pursuing in this area. It is critical that we do. And while we have these four platforms, they are quite modest. I know it’s important to recognize that they have some utility, but let’s not call breadcrumbs a feast. What we really need here is a trade policy in the United States that is capable of embracing and engaging our truly important trade partners. We don’t have that at the moment. It’s not a Taiwan specific problem; it’s a general problem that our country is wrestling with at the moment. But if there were an economy, a country that we could do it with… At the moment – given the importance as the two representatives from Congress noted – if there were a country out there worthy of that, with the support of Republicans and Democrats, it has to be Taiwan. It has to be. Given the strong support, the strong bipartisan support, between the two [sides].

So my hope very much is that while we could talk about the important issues that Shelly and Randy touched on, no one is being cavalier about the importance of the military threat, or how we should respond as a country. But that should not stand in and of itself as our only response. We need to find a way to step up economically and lead the world into a new era of economic engagement with Taiwan, which is substantive, deep and broad trade relationship with trade agreements. We can call them bilateral trade agreement. We can call them multilateral trade agreements if we can find ways to get Taiwan in. But to me, that’s the next phase in this space that we need to try to navigate our way through.

The Council thanks the East-West Center and AmCham Taiwan for this opportunity to participate in the launch of the Taiwan Matters for America initiative.