Analysts and journalists writing about Taiwan often repeat misconceptions and use misleading language. By using the same language as the restricted Chinese media, such articles actively reinforce and tacitly endorse the PRC’s biased views on Taiwan.

This list of frequently asked questions addresses some of the most common such errors. The FAQ is intended as a starter resource for analysts and writers who want to avoid bias and inaccuracies in their reporting.

The Taiwan Strait is International Waters

The U.S. considers the Taiwan Strait to be international waters, not Chinese territory.

The island of Taiwan is located approximately 100 miles off the east coast of China, across a body of water called the Taiwan Strait.* The Taiwan Strait is part of the South China Sea, and China has claimed the area as its territorial waters.

However, the United States has consistently said that it considers the waterway to be international waters rather than Chinese territory. In May of 2019, U.S. Pacific Fleet spokesman Cmdr. Nathan J. Christensen commented that “The US Navy will continue to fly, sail and operate anywhere international law allows.” His comment came after two U.S. Navy ships had sailed through the Taiwan Strait. In May of 2022, the Commander of the U.S. 7th Fleet said “The Ticonderoga-class guided-missile cruiser USS Port Royal (CG 73) conducted a routine Taiwan Strait transit … through international waters in accordance with international law. The Ship transited through a corridor in the Strait that is beyond the territorial sea of any coastal State.” See below for a quote explaining this statement.

The United States have sailed vessels through these waters for many years. Other countries – like Australia, Canada, and France – have done the same. However, misleading headlines often reference these types of transits as antagonizing China or as increasing tensions with the PRC, which embraces the PRC view rather than the international view. The truth is that these types of transits are a routine part of FONOPS (Freedom of Navigation Operations) for the U.S. Navy in the Indo-Pacific.

Under the United Nations Convention on the Law of the Sea (UNCLOS), to which China is a party, China enjoys a 12 nautical mile territorial sea off of its coasts. China does not consider Taiwan to be a sovereign state, and therefore claims the 12 nautical miles off of Taiwan’s coast as its territorial sea as well. However, regardless of the status of Taiwan as a country, the Taiwan Strait still contains a corridor of international waters and airspace beyond the territorial sea of any state. Within this corridor of international waters and airspace, all states and their vessels enjoy freedoms of navigation and overflight and all internationally lawful uses of the sea and air.

While China may have limited rights and jurisdiction in the parts of the Strait that comprise its contiguous zone (CZ) and exclusive economic zone (EEZ), it does not have sovereignty over these areas. CZs and EEZs are international waters in which high seas freedoms of navigation and oversight apply. The area above these international waters is commonly known as “international airspace” and is similarly not subject to any nation’s sovereignty. Under UNCLOS, even within China’s 12 nautical mile territorial sea, other nations may exercise “innocent passage” without China’s permission, meaning that they can engage in activities that do not harm “the peace, good order, or security” of a coastal state, as defined in the treaty. Aircraft do not have an analogous right to overflight of the territorial sea.

* Technically consisting of two straits, which is why the waterway is sometimes referred to as the Taiwan Straits

Journalists and analysts often conflate the two versions, and explicitly say that the U.S. abides by the PRC’s version of One China. However, this is both incorrect and a false interpretation of U.S. policy.

The United States’ “One China Policy” does not recognize Taiwan as part of the PRC.

The official U.S. policy is that Taiwan’s status is undetermined. The One China Policy is intentionally ambiguous, and the U.S. does not take a position on the resolution of the Cross-Strait situation – leaving any final resolution of their differences up to the two parties. However, the U.S. opposes either side unilaterally changing the status quo, and has stated its interest in the peaceful resolution of Cross-Strait differences. Washington has also said that any such resolution should take place with the consent of the Taiwan people.

While interpreted slightly differently by different U.S. administrations, the U.S. One China Policy has long served as a way to maintain a strong relationship with Taiwan while also maintaining official diplomatic relations with the PRC.

The PRC follows the One China Principle, a core belief stating that Taiwan is an inalienable part of China, with the PRC serving as the sole legitimate government of that China. The U.S. acknowledges this position, but does not take a stance on its validity.

The Taiwan Relations Act, the three Joint Communiqués with the PRC, and the Six Assurances to Taiwan provide the foundation for U.S. policy on Taiwan and China.
Please see One China Policy Primer – The Brookings Institution for how the U.S.’ One-China policy interacts with these documents.
See also One China, Multiple Interpretations by the Center for Advanced China Research.

What Does Using the Term *Mainland China* Imply for Taiwan?

The term “Mainland China” tacitly implies that Taiwan is part of Chinese territory.

Analysts and journalists frequently use the term “mainland” to refer to the PRC. The term appears in most writings about Taiwan, China, and cross-Strait relations. A search yields the following definition:

Mainland: A large continuous extent of land that includes the greater part of a country or territory, as opposed to offshore islands and detached territories.

In fact, the PRC government mandates that journalists use “Taiwan” and “the Mainland” as corresponding concepts. By continuing to use this terminology, writers reinforce the PRC’s view of Taiwan as an integral part of its territory.

Will Taiwan Reunify with China?

Should Taiwan and China join together in the future, they would unify. By definition, they can never reunify.

The term reunify is problematic, because it falsely implies that Taiwan and China were once a single entity that then split. This is incorrect. The Republic of China (Taiwan) has never been a part of the People’s Republic of China (PRC). In fact, the two sides fought against each other in the Chinese Civil War.

Is Taiwan a Renegade Province?

Taiwan is not, and has never been, a province of the People’s Republic of China (PRC).

Referring to Taiwan as a “renegade province” or “breakaway province” insinuates that Taiwan is a province of China that suddenly decided to rebel and leave. This is incorrect. Taiwan was governed from China for a brief period (1887- 1895), but was ceded to Japan as part of the 1895 Treaty of Shimonoseki. It did not break free from China in the way that the term “renegade province” implies.

In addition, the term is prevalent in English language writing only. It is not used in Chinese. As a way to assert their One China Principle, the PRC does refer to Taiwan as a province of China. However, it does not include the modifying adjective “renegade” when doing so.

Why Do Articles About Taiwan Use So Many Scare Quotes?

Scare quotes — aka sneer quotes or quibble marks — are quotation marks surrounding words of phrases to indicate non-standard word usage. Writers use the marks to signpost irony, doubt, skepticism, or disagreement. They allow writers to express distance between the word or phrase and the author of the text.

Chinese media use scare quotes to minimize and invalidate Taiwan’s democratic government. Scare quotes regularly enclose the names of Taiwan government agencies, as well as the titles of government officials. They also enclose any concepts deemed supportive of Taiwan as a sovereign country. In fact, the PRC government mandates scare quotes around some words or phrases, in particular ones that reference territory, sovereignty, Hong Kong, and Taiwan.

Why is the Taiwan President called Leader or Ruler?

Articles sometimes refer to the President as just the “leader” or “ruler” of Taiwan, rather than using their correct title. This minimizes the President’s role, and essentially demotes them to a provincial leader or regional administrator instead of a head of state.

Chinese journalists are expressly prohibited from using “President (or Vice President) of the Republic of China” in articles. By using the same language as the restricted Chinese media, English language journalists and analysts actively reinforce the Chinese view of Taiwan as merely a province of the PRC.

The democratically elected President of Taiwan serves a term of four years. He or she is the Head of State of the Republic of China (ROC). The President also serves as the Commander-in-Chief of the ROC Armed Forces. Due to the island’s political status, there are complex diplomatic protocol issues surrounding the Taiwan President. However, they usually receive standard head of state treatment when making international trips to diplomatic allies.

What Are Some Good Information Sources on Taiwan?

The United States and Taiwan enjoy a robust unofficial relationship. Maintaining strong relations with Taiwan is a major U.S. goal, in line with the U.S. desire to further peace and stability in Asia. The relationship between the U.S. and Taiwan is governed by the Taiwan Relations Act (Public Law 96-8), which was signed into effect on January 1, 1979.

The American Institute in Taiwan (AIT) and the Taipei Economic & Cultural Representative Office (TECRO) are the two non-governmental organizations established to conduct day-to-day operations in support of the bilateral relationship. The mission of AIT is to advance the interests of the United States, and to serve and protect U.S. citizens in Taiwan. TECRO represents the interests of Taiwan in the United States in the absence of formal diplomatic relations. Both AIT and TECRO function as de facto embassies.

How to Locate Taiwan Trade Data?

Both the United States and Taiwan maintain detailed trade data, showing our substantive economic ties. Taiwan is a top trading partner for the U.S., while the U.S. ranks among Taiwan’s top three trading partners.

In the United States, the U.S. Census Bureau maintains updated statistics on U.S. trade in goods by country. Their trade data covers both imports from and exports to Taiwan, and their data is available both online and for download in a spreadsheet (https://www.census.gov/foreign-trade/balance/c5830.html). For trade in goods and services, see  FT900: U.S. International Trade in Goods and Services (https://www.census.gov/foreign-trade/Press-Release/ft900_index.html).

In addition, the U.S. International Trade Commission maintains the USITC DataWeb (https://dataweb.usitc.gov), providing detailed U.S. merchandise trade and tariff data. Trade data for 1989 to the present are available on a monthly, quarterly, annual, or year-to-date basis, and can be accessed using a powerful search function. 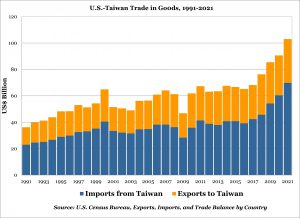 How to Find Taiwan Defense, Military and National Security Information?

The Taiwan President serves as the Commander-in-Chief that leads the Taiwan armed forces. The President also chairs the National Security Council, which decides national defense guidelines relevant to national security.

See in particular the following posts:

The Institute for National Defense and Security Research (INDSR) is the top military-focused think tank in Taiwan, and maintains reports and data about the Taiwan military.
The Taiwan in Perspective blog also maintains resources on Taiwan’s politics, security, and defense.