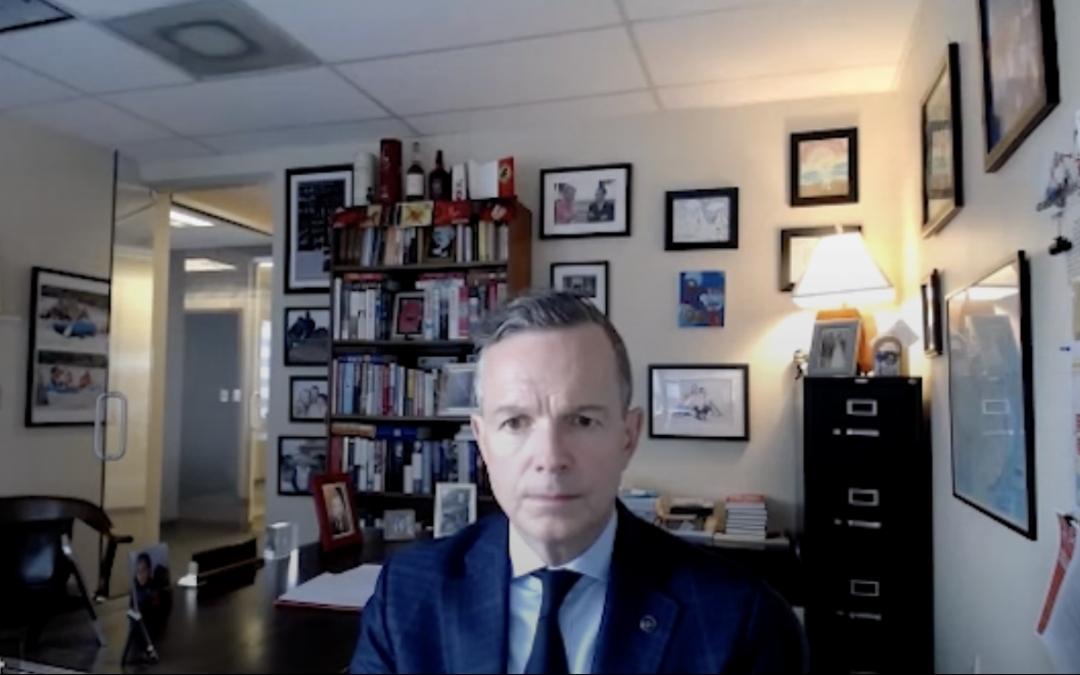 In announcing the event, the Wilson Center said:

The Wilson Center’s Taiwan Scholar Kristy Tsun-Tzu Hsu discusses the role Taiwan’s semiconductor industry can play not only in furthering Taipei’s global presence, but also partner with Washington to strengthen the supply chain of the United States and beyond. She is joined by the President of the U.S.-Taiwan Business Council Rupert Hammond-Chambers and the Wilson Center’s Director for Geoeconomics and Indo-Pacific Enterprise Shihoko Goto.

During his speech, Rupert Hammond-Chambers said:

China policy in the United States shifted dramatically [when Trump became president] and we went from a bipartisan accommodationist policy towards China (under President Bush and President Obama, perhaps President Clinton too), to one that was more confrontational under President Trump and then under President Biden. I personally believe it’s been a very healthy shift – far more realistic in respect to the challenge that we face from China on a whole range of fronts. Nevertheless, there is some debate over tone and direction, but I am comforted in the view that it is bipartisan in the United States, with the bulk of Republicans and Democrats agreeing on this newer direction, and potentially agreeing on how we should handle it. I think the CHIPS for America Act is a good example of the sort of bipartisan cooperation we can see in response to this.

I would also point to the discussions that the United States is driving, in cooperation with the Japanese and the Koreans. I think there is, in the medium to long term, room for Taiwan in there and certainly with the United States and Japan. [South] Korea-Taiwan relations tend to be quite tricky, and I’m not sure how welcoming the [South] Koreans would be to an alliance in semiconductors with Taiwan. Certainly Japan and the United States should welcome that long-term vision for a trilateral relationship in the semiconductor space, where these sorts of considerations are given considerable thought. Policies that are coordinated to both increase and improve the investment environment in these respective countries, and to deal with the challenge of China. China is a predatory economy that has a long history of stealing intellectual property and attempting to reverse engineer it or simply apply it in China to then compete against western countries. It’s a massive wealth transfer to China, and represents a serious challenge to the global economy ongoing [as well as] for specific companies.

I think Taiwan’s position, when it comes to talent, is less structured around the politics of education, and more about the size of Taiwan’s population and the problems that Taiwan is increasingly going to face with its immigration policies and its low birth rate. Can Taiwan produce a population large enough to meet the ambitions of economic growth and expansion? I think that’s really the bigger question. The question isn’t if academic institutions are up to the task of educating a workforce strong enough to meet the demands of TSMC, UMC, Foxconn/Hon Hai and others. I think that’s clear. It’s whether or not the population is large enough to support that. Here in the states, regrettably, we’ve got a bigger challenge on education, although population issues are starting to percolate up a little bit. Our challenges are more focused regrettably around the politicization of education in the United States – the movement of the culture wars into our educational establishments, the lowering of mathematics and science standards and a general assault on stem, and what we’re going to do about that. If, in fact, the United States is going to dramatically increase the number of manufacturing centers that we have for semiconductors and other high-end manufacturing, it’s not just enough to get the manufacturing here. There has to be the R&D (research and development) to go with it.

Although we are seeing this expansion of industrial policy, we’re also seeing a growth of anxiety in Taiwan that its technology crown jewel may be somewhat eroded to a point where Taiwan becomes less important – not more important. Of course, Taiwan struggles greatly because of its political isolation and the efforts the Chinese make to coerce Taiwan politically and to isolate it. However [Taiwan]’s enormous economic resilience and importance counter-weighs that to some degree. And of course at the heart of that is the semiconductor jewel. And if there’s a concerted effort in the world to provide more balance, particularly at the high end, I think it creates a political concern in Taiwan, that its strength in this area would be eroded and, as a consequence, its political weight would be eroded too – making it more vulnerable to the Chinese, not less.

The US-Taiwan Business Council thanks The Wilson Center for the opportunity to speak at their event.