U.S.-China trade issues, the pandemic, and recent shortages in automotive manufacturing have exposed the U.S. vulnerability to supply chain disruptions. They have demonstrated the economic and national security risk that offshore vulnerabilities pose to the United States. The U.S. needs to reduce this dependency by incentivizing onshoring, diversifying its manufacturing base, and making key supply chains more resilient. The risk is clear across sectors such as healthcare and pharmaceuticals, as well as in consumer goods including food, gasoline, and basic supplies. But the risk posed by a potential supply chain disruption also holds true for another significant and strategically important industry – semiconductors.

Semiconductors are the main component in all modern electronics, and are therefore a critically important segment of the global economy. Any disruptions to the semiconductor supply chain would have serious repercussions for U.S. businesses and consumers by negatively impacting the economy, severely damaging the U.S. technology sector, and hampering U.S. innovation and technology leadership.

Semiconductor supply chain disruptions could also have severe repercussions for U.S. national security and U.S. critical infrastructure. Access to cutting-edge semiconductor technologies is a key driver for the weaponry that the U.S. military needs for its defensive and offensive capabilities. Currently, Taiwan and South Korea account for 100% of installed capacity to mass produce high-end semiconductors at technologies below 7 nanometer (nm), which leaves the supply to the U.S. military vulnerable. In addition, semiconductors serve as crucial components in the communications networks and transportation systems, among others, that underpin U.S. critical national infrastructure. 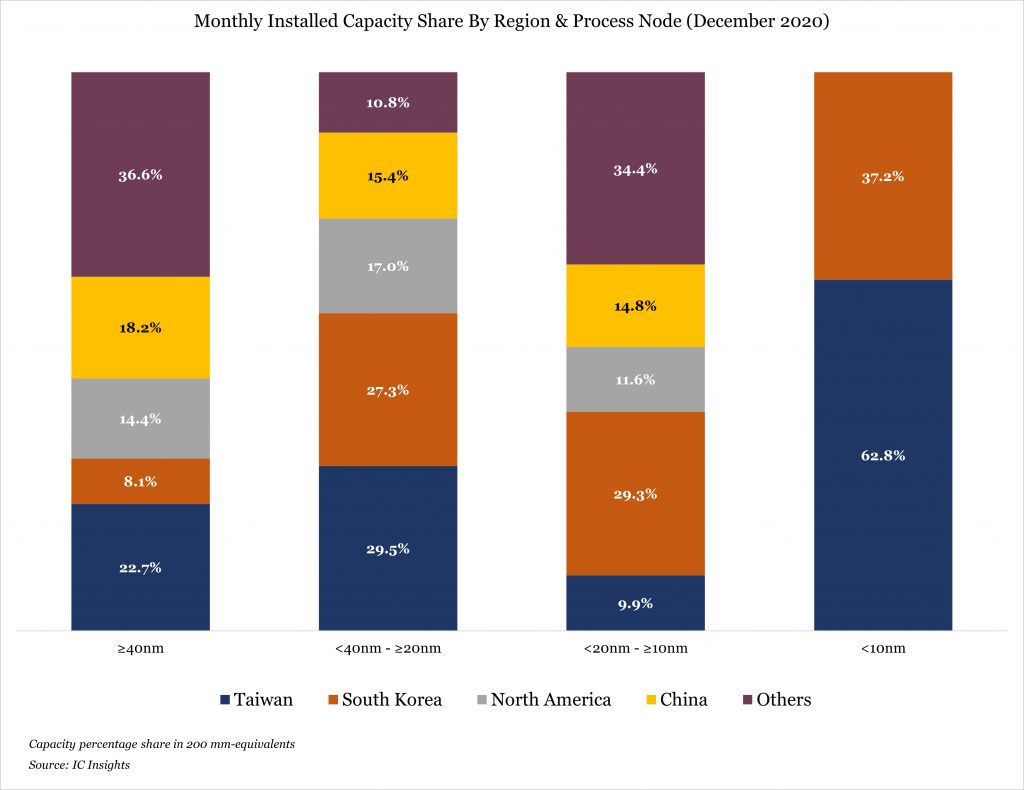 Countries around the world serve as key nodes in a dispersed network of suppliers for these core building blocks of the technology that modern society has come to rely upon. The U.S. works with partners around the globe, and yet the island of Taiwan may be the most critical link in the entire technology ecosystem. Integrated Device Manufacturers (IDMs), which both design and produce semiconductors, play an important role in the industry — with two of the largest such companies based in the United States. However, contract manufacturers of semiconductors (known as “foundries”) and associated companies based in Taiwan also serve as key U.S. supply chain partners. Taiwan is a significant supplier not only to leading U.S. technology firms like Apple, Texas Instruments, and Qualcomm, but also to U.S. allies globally.

Given its current structure, the risks for disruption in the semiconductor supply chain are significant. That is true whether the source of the disruption is a natural disaster like an earthquake or typhoon, a global shock to the trading system like the COVID-19 pandemic, a disruption caused by political considerations such as an armed conflict, or by other factors. Potential risks to the semiconductor supply chain are especially acute in Taiwan, given its complex political situation and the challenges posed to it by China. Taiwan is also at risk for natural disasters, as earthquakes and typhoons are common occurrences.

Given the importance of this industry, more will need to be done to encourage and strengthen the U.S. semiconductor industry position. Future investments in leading-edge technology for the U.S. market — incentivized with government funding — could work to bend the curve slightly. However, it will likely take significant time and massive investments to realize a positive outcome. The CHIPS for America Act is a good first step in supporting the U.S. semiconductor industry, and once fully funded should serve as an incentive for companies such as TSMC, Samsung, and Intel to build leading-edge semiconductor fabrication facilities on U.S. soil. Similarly, the proposed FABS Act should be expanded to include tax credits on expenditures for both manufacturing and design, to help strengthen the overall U.S. position in the crucial semiconductor sector.

This report, a joint effort by The Project 2049 Institute and the US-Taiwan Business Council, provides an initial look at vulnerabilities in the semiconductor supply chain, with a particular focus on Taiwan as a crucial partner for the U.S. in the semiconductor sector. It is part of an ongoing study of potential implications of technology supply chain disruptions involving Taiwan, a project that will later result in a final report – likely in 2023.

This project, and the resulting final report, is intended to examine technology and semiconductor supply chain security as a pillar of the U.S.-Taiwan nexus — joining democracy and national security as foundational mainstays of shared interest and bilateral ties. That in turn is likely to broaden the constituency of support for Taiwan in the U.S., including in the business community and in Congress. We will also offer recommendations for the U.S. government and U.S. companies on mitigation strategies for the vulnerabilities identified.

Report published by the US-Taiwan Business Council and the Project 2049 Institute
Principal Investigator is Dr. John Fowler, Non-Resident Senior Fellow for Semiconductor Research at the Project 2049 Institute. Dr. Fowler is also the Motorola Professor of Supply Chain Management in the W.P. Carey School of Business at Arizona State University.
Edited by Lotta Danielsson